It’s purposeful museum marketing, but there is content behind it!

Magdolna Nagy, the acting director of Museum Education and Methodology Centre (MOKK), Hungarian Open Air Museum was interviewed about the experience of the study tour.

Within the project having been implemented since 2017, the museum coordinators have participated in a study trip every year, primarily in the neighbouring countries. What was the purpose and significance of this trip much larger in scale than the previous ones?

One of the responsibilities of the museum coordinator network is to collect good practices of museums, and to share them with museum professionals in their network. During the period of our project, we annually organise a study trip abroad for our coordinators so that they have the opportunity to get to know good practices not only in Hungary but also abroad. What made this particular tour special was that this time for-profit approach was in the focus. The good practices we observed earlier in Vienna or Transylvania were quite similar to those in Hungary. We obviously saw some new approaches, but we didn’t see operations so much business oriented, such high level museum marketing as in Dutch museums. Thus the coordinators could observe an entirely different approach, which is useful to be aware of, since many of the observed good practices and ideas can be applied on the home front. 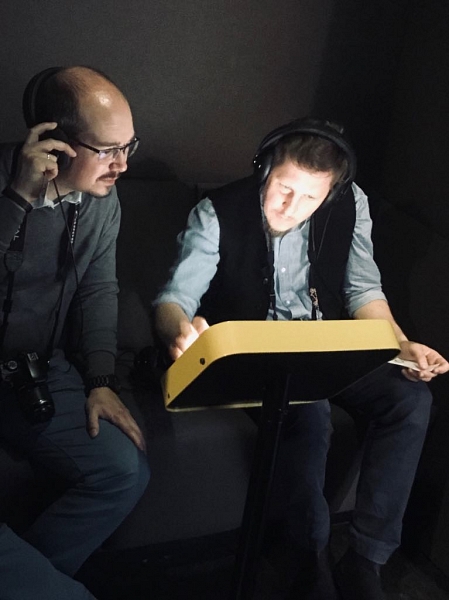 Could you point out some particular examples the coordinators actually regarded as a novelty?

The Hermitage Amsterdam operates on purely commercial grounds, without state subsidy, with the support of different sponsors and donors, which compels the museum to produce exhibitions which can attract visitors. That is the reason why needs assessments are constantly taking place and concepts are tested and prepared by involving different focus groups, students and teachers. Exhibitions are made in a purposeful way, the method of presentation and interpretation is also selected in a mindful way. Tourists are in the focus, constant innovation is an absolute necessity, as they are in competition with many other Amsterdam museums. 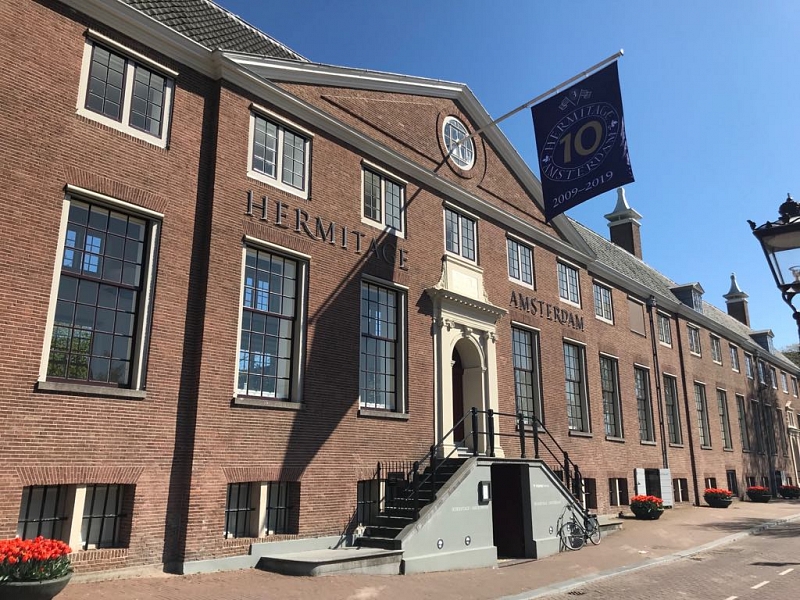 Much was learnt from the Amsterdam Museums Association coordinating 25 museums, which are promoted together as one common brand. They in Amsterdam have already realised that together they can carry out a much more effective marketing activity. Smaller institutions if they haven’t got enough financial resources to promote themselves individually, but they are included on the map issued by the Association and become visible for tourists, their low visitor number can quadruple. This win-win collaboration may be worth considering for Hungarian museums.

What was the most unusual museum service or product offered by Dutch museums? The Dutch experiment entirely bravely follow the for-profit approach.  So, do they apply any method unscrupulously if it is creative and promises success?

The Van Gogh Museum and Van Gogh himself are regarded as a brand. For example, in the museum shop products possibly found attractive by young people and linked to Van Gogh are on sale. The examples include gym shoes decorated with motifs of Van Gogh pictures within a cooperation with a sports shoes company. They dared to touch a work of art in such a way, and their boldness seemed justified. The museum’s head of marketing shared with us that initially when the shoes were on sale, the whole stock was sold out on the first day. Of course, there is a question mark here, regarding how far you can go in terms of creativity, I don’t want to judge that, but I have to admit that together with the coordinators we started to speculate how this strategy could be adapted to Hungary. We also have quite a few renowned Hungarian people acknowledged abroad, consider for example Béla Bartók, whose name is rather powerful in foreign markets, if it is treated as a brand. 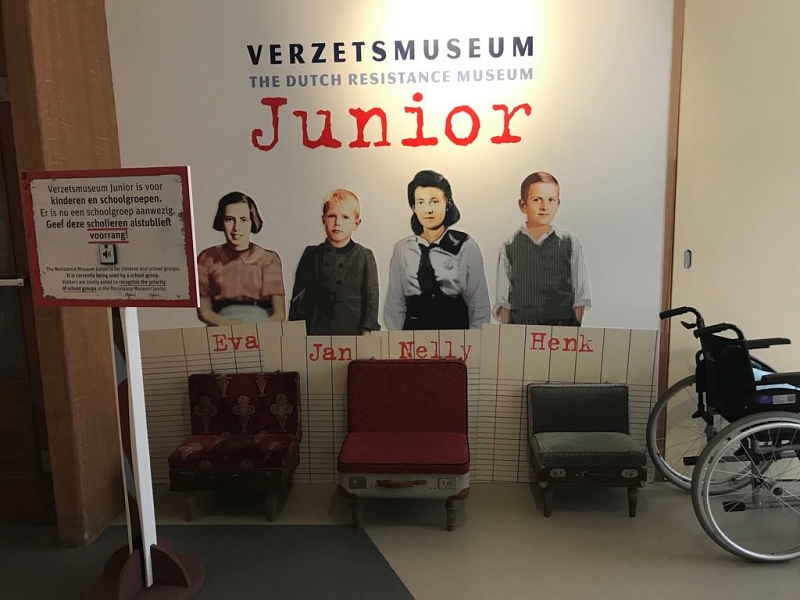 We found the Verzetsmuseum quite intriguing, where a special exhibition created for children from the perspective of four surviving kids, shows what they could go through during the war. We saw this method applied at several museums, where a topic was folded out through authentic life stories in an interactive way. In the Anne Frank House for example, it is the surviving father that tells us the story as a reminiscence.

In addition to these curator practices assisting comprehension, what kind of services or products were linked to exhibition topics difficult to digest?

The supply of museum shops is always based on the exhibition, and it is in absolute harmony with it. For example, books linked to the topic are sold. They offer services of convenience, for example exclusive online ticket sale was introduced, and managed to get rid of long queues, and moreover, children groups are regularly received. Museum education is very intense and lively in the Verseztmuseum, school children have the right of way, the exhibitions are closed for visitors while museum education sessions are going on for children. We saw that most museums use museum education workbooks, and teachers are provided with lesson plans. In this respect, we didn’t see big differences from our museum practice. 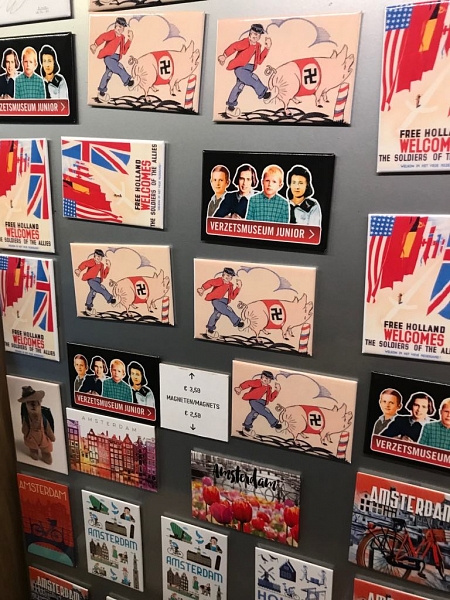 Márton Pacsika, responsible for the project’s methodology development as well as for the professional content of the study trip, also shared with us his overall impressions about Amsterdam.

Could you give us some reasons justifying the choice of the Netherlands for the destination of the coordinators’ study trip over Slovenia or Poland, as these countries had also been considered?

The museum system is one of the great strengths of the Netherlands, their museum marketing is outstanding, and they are brilliant at making museums visitor friendly.  The Hermitage being a privately owned museum, doesn’t receive state funds, they need to be attractive for visitors, at the same time talent management is another priority for them, and art clubs are organised for talented and underprivileged children. It is a crucial part of the Dutch capitalistic mentality that they are profit-oriented, though some is returned to the community.

Regardless of the success story of the Dutch model, namely that their museums are resilient, innovative, courageous and free to experiment, is there anything at all that they are struggling with?

The Dutch cultural sector was also subjected to acute austerity, and museums were not an exception after the post-crisis years. The Rijksmuseum, being one of the top museums often generates frustration over receiving ‘all’ the subsidies, because their funding is totally different from that of the small museums. It’s astonishing that even the washing-up boy will know the name of the head of the Rijksmuseum, which is not true at all about many smaller museums. The similarly exciting Tropemnuseum also significant in terms of national identity, is constantly struggling with financial matters. 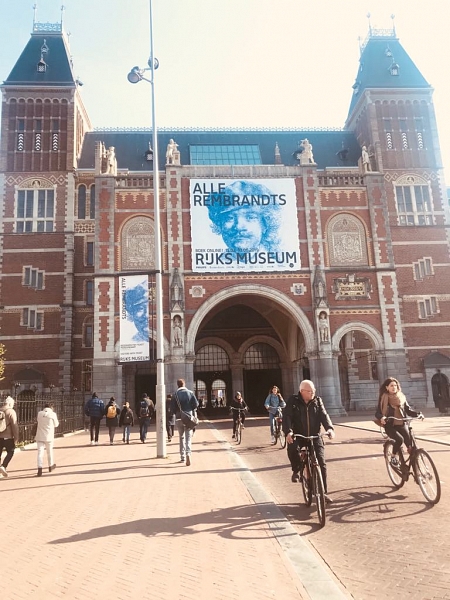 Is it still possible to speak of the Dutch model, does it even exist at present?

In the Dutch model museums have strong ties with city marketing. One of the problems of Amsterdam is that its downtown and red-light district attract many cheap tourists, while the city would prefer to have more affluent, more educated cultural tourists who also visit museums. Focusing on visitors influencing the image of the city as well as the income in a positive way, Amsterdam’s strategy is to push cheap tourists to the east, to Prague and Budapest. 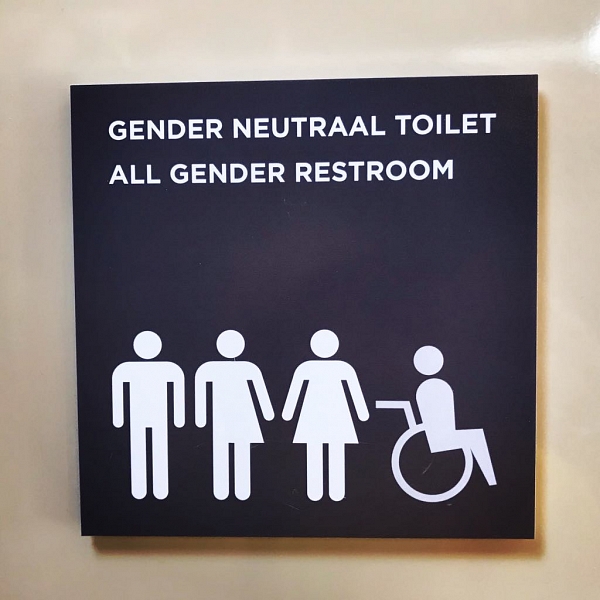 From a Hungarian perspective, what are the most important trend-setting characteristics of Dutch museums?

First of all, the oldest church of Amsterdam, the Oude Kerk could be pointed out. The whole city was built around this church, originally catholic, then protestant. It’s an extremely special place in the middle of the red-light district. Annually two contemporary art projects are presented there, the most significant international contemporary artists are invited who work there for two years on their location-specific work of art reflecting on the ecclesiastical collection and the context of Amsterdam. The contemporary and the historical tend to coexist peacefully in these projects, there is no antagonism between the old and the new. 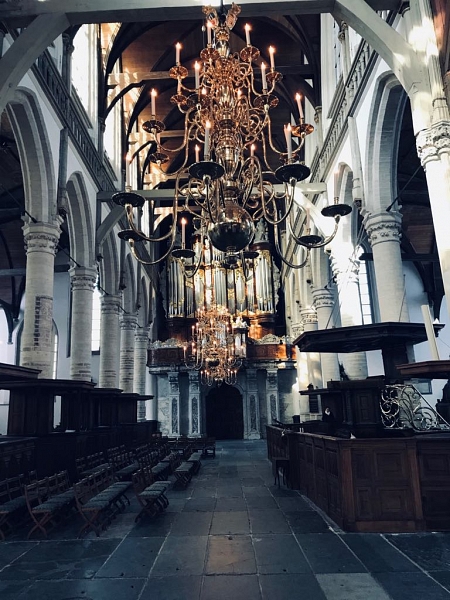 Amazing research preceded for instance the opening of the Versetzmuseum, students were continuously involved in the preparatory phase by interviewing them as a focus group, and also in the Hermitage thorough visitors’ research is conducted before opening exhibitions. In the past few years Dutch museology has been preoccupied with representation and identity, which our public discourse doesn’t include to such an extent. Post-colonialism is a current issue of Dutch museums, namely, how colonialism of the past can be processed. The so far marginalised groups without any power, those from the former Dutch colonies are presented. Dutch museums have gone through a transformation in this respect, file-cards of museum items are started to be rewritten. 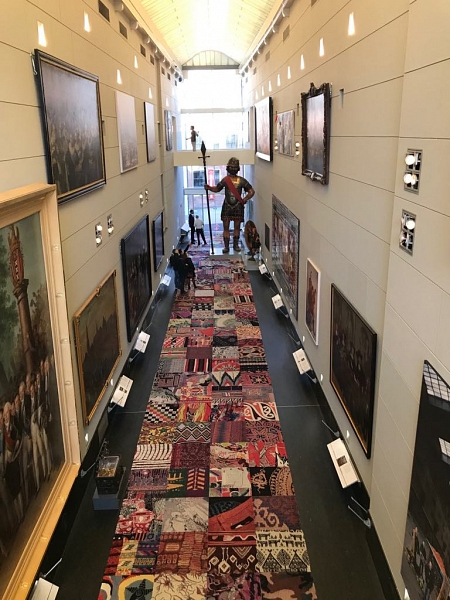 We visited the Amsterdam Museum, the local history museum of the city first, where they initiate long term collaboration with Muslim women visiting the museum during the preparatory phase of exhibitions or projects and their stories are attempted to be integrated into the museum collection. Regarding representation, it is a constant problem who and how are represented in culture and in the museum, and whose stories or artefacts are missing and how they could be made up for. At the same time, the texts criticising Islam by the film director Theo Van Gogh killed in 2004 are also included among the quotations on the walls of the children’s activity room, thus emphasising the importance of freedom of expression. 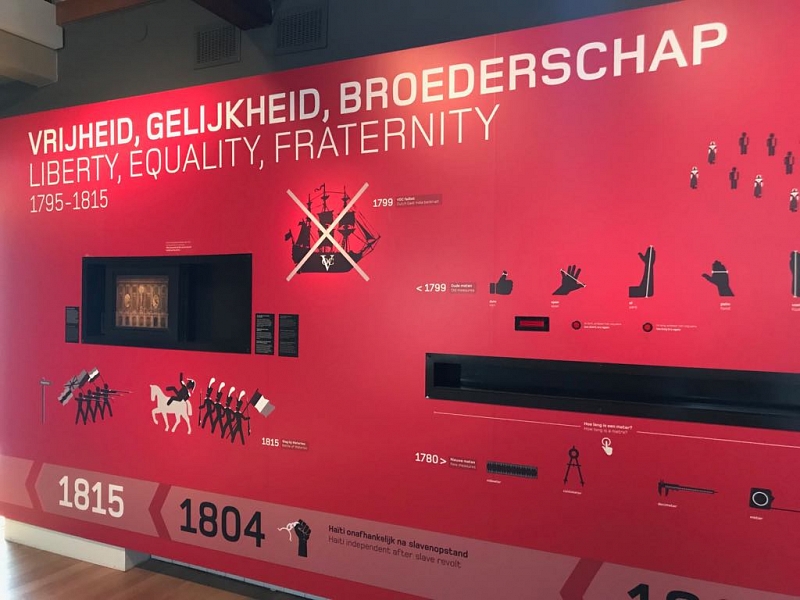 In spite that the Rijksmuseum is a huge institution the colonial past is always in the foreground of temporary exhibitions, and the transformation also extends to the permanent exhibition, for instance guided tours explicitly focusing on the colonial past are held. Although operating as an open museum is also beneficial for the institution, since a new audience is attracted to the museum, and not only the aspect of the earlier elite is in the focus, the economic model can’t be based merely on them. About 1 400 000 people have a EUR 65 Museumkart, by which any Dutch state museum can be visited free of charge, and if they have bought it, they tend to use it. Tens of thousands of people visit temporary exhibitions even of smaller museums.

The study trip took place within the European Union project entitled “Museum and library development for everyone” identification number 3.3.3-VEKOP-16-2016-00001. The project is implemented by EU fund of two billion HUF between 1 February 2017 and 31 January 2020, with the consortium cooperation of the Museum Education and Methodology Centre, Hungarian Open Air Museum and Szabó Ervin Metropolitan Library. The implementers of the project are committed to strengthening the role of equal opportunities, the inclusion of disadvantaged groups and creating possibility for providing equal access to cultural goods.