Professional materials - downloadable
Let's Learn From Each Other 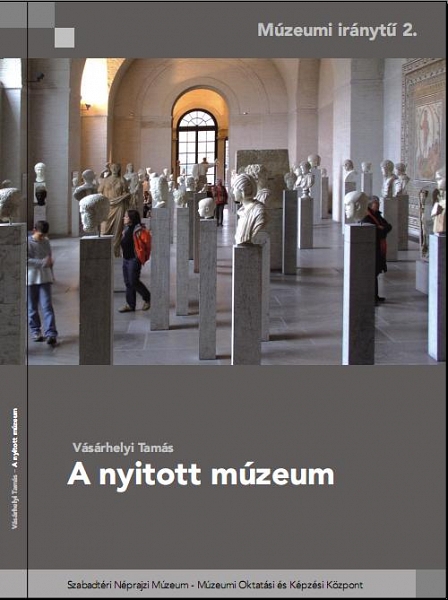 Author entered the magic world of museums 38 years ago, as a university student of entomology. His PhD thesises were made in the Zoological Department of the Hungarian Natural History Museum (flat bugs, Hemiptera: Aradidae). After 2 decades of entomological research in the Hemiptera collection he switched to the management of education and exhibitions, later also to marketing and training (adult education). In this volume he collected various earlier, yet published papers as well as new, unpublished ones. The papers are all relatedto various aspects of „the open museum”. This expression has been used to describe the museum as an institution open not only to visitors, the audience or the public as typical in the majority of literature, but towards all important stakeholders. Popular science papers demonstrate ways how different readers might be reached and attracted by entomological research results, PR papers show the same for exhibitions. Both theoretical and management issues are treated in the rest of the volume. Below we give an annotated Contents in English.

Contents
Introduction
Purpose, approach and methodology of the book is introduced and acknowledgements are presented.

Behind the scenes
A popular description of the main functions of the museum: collecting, preserving, storing, documenting, researching, exhibiting, to make the institution more transparent.

Towards the open museum
The expression appeared in one of author’s earlier papers: a report on the meeting of three ICOM committees in Ljubljana (2003).

Distortion of objects
A review of an excellent book (Translation of objects) of a Hungarian ethnographer on modern functions and role of museums.

Ottó Herman and the Hungarian National Museum
Ottó Herman was an outstanding Hungarian polyhistor of the 19th Century: entomologist, ethnographer, archaeologist, politician, linguist, etc. He played central role in the development of several scientific fields as well as in that of the Museum, and made substantial efforts to popularise science and museology alike.

Alpha Museum from Alpha Movie
Once a Menage, and after the 2nd World War a movie (named Alpha Movie), which later has been burnt out, a classicist building was re-erected to house the exhibitions of the Hungarian Natural History Museum. The museum had been established in 1802 as part of the National Museum, and ever since its exhibitions were installed in the building of this (historical) museum. The paper outlines the reconstruction project and aims of the newly established exhibition building.

Collecting
It has started with a mummy and a bat

Quotations from the first record books of the museum’s vertebrate collections reveal the development of the collections, and mirror the broad popular support this “new” institution received from the contemporary public. Some characteristic figures of the 19th Century history of the museum are also introduced.

Meditations in the tropics
An essay on moments and thoughts of a collecting trip to Vietnam. What happens at nights around the lamp used to attract and collect insects? Why do creatures become naked under the lamplight? What makes evolution and diversity unparallelled in the tropics? Why is it important to travel and collect in the tropics (and, of course, at home) and how does it (if it does) help the development of public understanding of environmental issues?

In memoriam Lajos Biró
Lajos Biró was a poor amateur entomologist. In 1896 he decided to travel to New Guinea, where he spent 7 years in pauperity, but collected some 200 thousand animal specimens and carried out invaluable entomological, ethnographic and anthropological collectings and observations. He had an excellent style in his letters and books, quotations from his works make it fun to understand his life and goals in this difficult mission.

(True bug) collection in Budapest
Author offers personal perspectives to working in an entomological collection, and connects collecting (of anything, even the least “valuable” things) with inner psychological needs and higher social ideas.

Research
What is zoo-taxonomy, why is it important, and how should we make it widely known?
The importance and various potential users of this research field are treated, and an assertive way of communication is suggested as well.

A tiny insect and the national pride
It is a lively story of science: how a really peculiar new insect species, living in the Lesser Antilles, was discovered. It was collected, described and preserved by Hungarians, bearing the name of one of the eminent Hungarian zoologists Endre Dudits.

On scientific publications of Hungarian museums
Based on personal interviews author presents data and offers his opinion about the goals of museum publications with special reference to yearbooks and catalogues, and the unnecessary amount of copies. The second part gives the results of an analysis of the values and distribution of copy-numbers in 2001 and 2008.

Exhibition
From ancient showcases to edutainment
A history and evolution of natural history exhibitions in general and that in the Hungarian Natural History Museum.

Two Pictures of a Gallery
A funny, step by step comparison is given of an (unpersonal) visit in a professional touristic exhibition and one in a small local history collection (resembling the chamber of curiosities) where the living collector gives a guided tour to the group. Which one do you prefer?

The Arch of Noah
An arch has been erected in the exhibition Man and Nature in Hungary. This paper describes one of
the usual sessions there. Children (and adults) recall the story from the Bible, discuss it, giving time
to admiration of diversity of life, and reach a conclusion, that, as described there, the event could
not happen. The symbolic meaning is, however, due and relevant also in our age. Nature protection
is an evergreen issue. Going personal, everyone recalls a case when he or she saved the life of an
animal (e.g. ladybirds saved on tip of finger from river water, earthworms and snails transported
from concrete to grass, etc.). Noah lives among us, in us!

On insects – from another eyepoint
Short introduction of an earlier temporary insect exhibition – from a cultural entomology point of view.

Dinosaur-diseases
Invitation to a temporary dino-exhibition, written for a journal distributed free among those, waiting for the doctors in hospitals. The paper shows up fossil evidences of ill dinosaurs (they also suffered).

Papuans and skinheads
Invitation to a temporary exhibition on Lajos Biró (see above). His texts on the life and ethics of aboriginal papuans has been yet relevant in contemporary Europe where racist actions happen.

First Hungarian Store of Views
Invitation to a small museum – in a recycled mill – in a small village, with a temporary exhibition on decay of things (ideas, persons, tools).

Mihály Csiby tells his stories
Mihály Csiby is an excellent insect-illustrator and, at the same time, graphic designer of church decorations, frescoes and glass windows, too. This chapter describes the artist and his common work with author.

Stakeholders of museums
An introduction of the idea and a simple general stakeholder analysis is given.

What does HNHM mean and for whome?
A narrative stakeholder analysis and different benefits of the Hungarian Natural History Museum – on the occasion of its 200th “birthday”.

Lifelong learning and the museums
A review of literature in the topic.

The future of museums
On the future which has its roots in the past (and the present)
The paper collects contemporary ideas, constrains, issues around museums and also around natural history museums. What gives them merit and a reason for existence? What changes help them to survive in our age and to serve the public better? How should they increase the “museum carrying capacity” of the Hungarian community? An evolutionary-ecology approach of museums closes the chapter.

On Plate 1. Radiolaria are depicted from the famous book of Ernst Haeckel: Artforms of Nature. These animals have millions of fine plasma filaments connecting them to the environment, this multitude of connections making their (planctonic) life possible. On the other side they have an inner structure giving them strength and shape. They are important actors of Life in Earth. They symbolise the open museum aright.